The inspiration for Anya's second birthday party came close on the heels of her first one. A hibiscus flower gave me the idea for a Hawaiian theme. But when it came to finalise, I was still confused between this and an animal one. Finally, I reasoned that it was better to do a Hawaiian theme while I was still calling the shots. In another year, her choices would rule and she might not be interested in this theme. So Hawaiian it was!

I must now admit that I also wanted to do a Hawaiian theme because I was enamoured by a "message in a bottle" invite. So as soon as the theme got finalised, the hunt for an ideal bottle began. Incidentally, just a few weeks back, we had started a garbage segregation system at our complex and while dealing with the recycler, I spotted Bacardi Breezer bottles. I knew I had found my bottle! 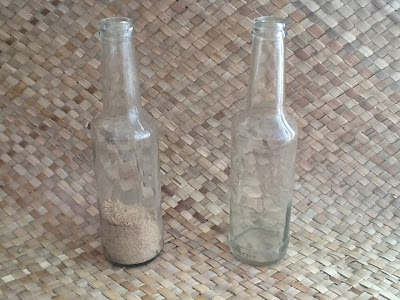 After the bottles were soaked and cleaned, they were ready to be decked. For this, I got some sand and filled the bottles one quarter with sand. I also fished out sea shells from my collection and dropped a few on the sand bed. 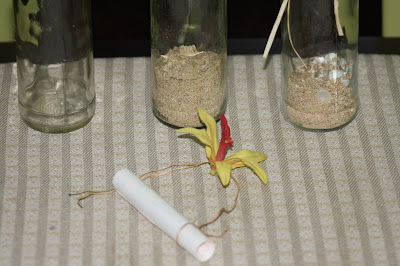 Then came the task of penning an invite. I am a DIYer and no DIYer worth her salt would like to cut and paste a rhyme. After acquiring a dash of Hawaiian vocabulary and a couple of days of brainstorming, I managed a poem. Here it goes.....


Time does fly, we just can't figure how
It's already time for Anya's 2nd Birthday luau

Oh, how we miss her babyhood days
Even as we enjoy her new endearing ways

She is full of fun, frolic and adventure
Ready to explore every nook and corner 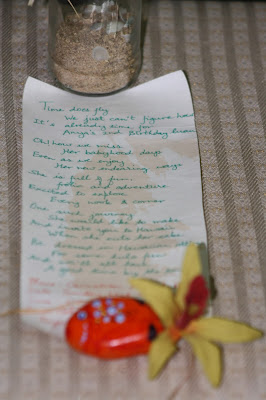 I cut a sheet of paper 4 x 10 inches, scribbled the poem and scrolled it up. Then I took a long piece of grass string and tied the scroll with one end. The other end of the string was tied to an artificial flower which also acted as a bottle stopper. The idea was to pull up the scroll by gently tugging at the flower. I didn't know where to source a cork for the bottle, so I came up with the idea of a flower. This bunch of yellow flowers was with my sis-in-law for years and she wanted to dispose them off. Initially, I wanted to use fresh flowers instead of fake ones but the logistics wouldn't work out. The invites had to be hand-delivered on different days and I couldn't be sure of a fresh flower at hand every time. Anyway, the flowers were being reused, so I settled on the artificial ones. 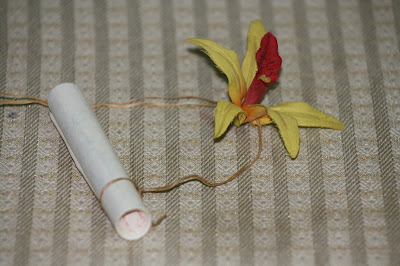 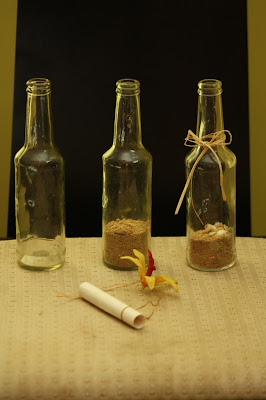 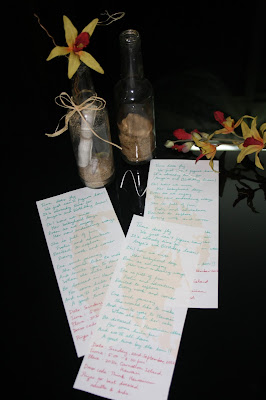 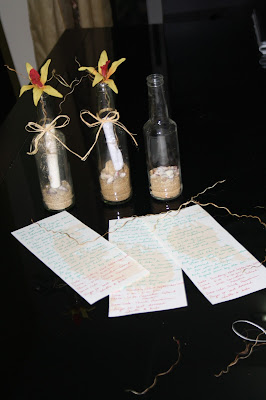 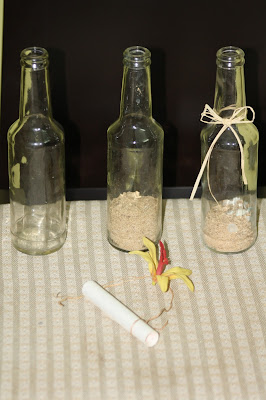 I tied a grass string bow on the neck of the bottle. The end result looked good and I was quite happy.
After burning some mid-night oil, I managed to finish 5 invites. 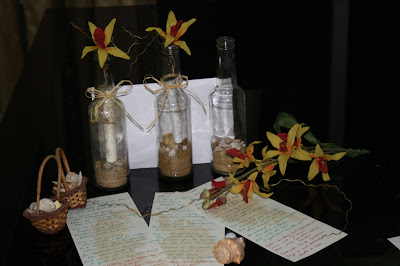 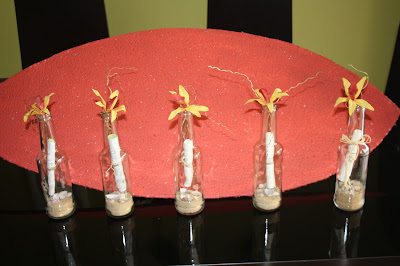 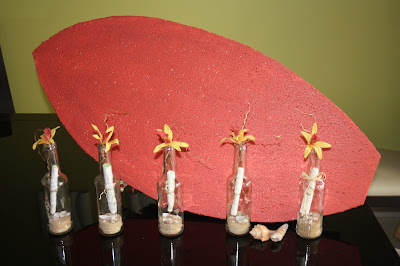 It was a good start for an eco-friendly party. All the material used was either natural or reused : glass bottle , sand, sea shells, grass string, a sheet of paper and a flower.

Email ThisBlogThis!Share to TwitterShare to FacebookShare to Pinterest
Labels: Hawaiian theme, Message in a bottle invite