Welcome drink:
What could have been more natural and befitting the theme than tender coconut water! We bought dozens of tender coconuts, decorated them with umbrella cocktail sticks and placed them below surfboards towards the entrance. As soon as a guest came, she was welcomed with a lei. Then D carved an opening in the coconut and served it to the guest.


Table decor and food:
Incidentally, I had bought a woven-palm-leaf mat and baskets from a recent trip to Kerala. The mat came in handy to cover the dining table. Sides of the table were covered with banana leaf skirt. The cake table was also decorated with the same skirting. In addition, baby pineapples, bird of paradise were put on the sidewall. Unfortunately, we don't have a picture. 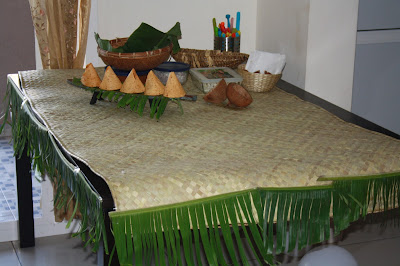 Since the party was at home, I used steel plates for kids and Corelle for adults. (I had to keep my finger crossed throughout the snack time but it was worth it). One of the best purchases I have made are these colorful Ikea kids cutlery sets. Though they are plastic, their reusability saves the day. 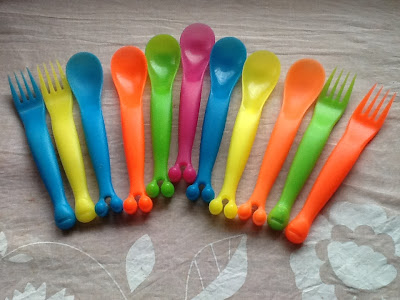 The only disposable thing I used were glasses. I kept a few steel ones but had to have disposables at hand which I made sure were paper. From next party onwards, I am  quite tempted to request parents to carry water in sippers/bottles for their little ones. In that way, I will have to keep glasses only for other drinks. I wonder if the suggestion would be well received and more importantly, acted upon.

Other than cake and ice-cream, food was mostly made at home. We made pav bhaji, pineapple pasta, fruit salad, a coconut-capsicum salad, and idlis. One thing which I was quite proud of and can't help boasting about were volcanoes fashioned out of papads. The plan was to light some coal and put under each volcano to give a smoking effect but like many other ideas, this had to be shelved due to lack of time.

Games:
Kids had a go at hula-hoop. Adults tested their flexibility at limbo. I used a bamboo pole where one end was held against a wall and the other by my niece. Guests had a gala time and surprisingly were so good at it that we had to revise the lowermost marking to decide upon the winner!

Email ThisBlogThis!Share to TwitterShare to FacebookShare to Pinterest
Labels: Food and drink for a Hawaiian themed green birthday party