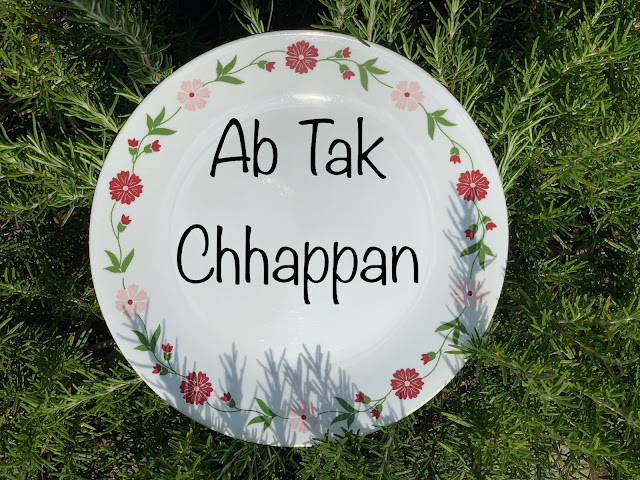 560 is the number of plates and spoons that I've managed to save from landfills in the last couple of years.

By carrying my own reusable plate and cutlery to get-togethers and lending my reusable plates to others for their events. (Well, the number is 560 plus now but the title mimicked the movie 'Ab Tak Chhappan' and I hoped to catch your attention with it. It worked, didn't it!)

My socio-environmental experiment on 'Bring Your Own Plate' (BYOP) has been quite interesting so far.

When I moved to the US about three years back, I was flabbergasted to see high use of disposables. Be it a hotel breakfast or a casual eating joint, the rate of waste creation was alarming. If I went to eat out, a mound of disposables like boxes or plates, plastic cutlery, tissues, ketchup sachets etc. piled up very fast.

At get-togethers and birthday parties, the throwaway mania would be at its peak. Right from decorations to tablecloths, serving trays to plates and cutlery, water bottles to paper napkins, everything would be a one-time use. It burned a hole right into my heart to see perfectly good plastic table cloths being trashed. "But you can use them for the next birthday party!" I tried to reason with a host. "Don't bother. They're just a dollar each. Besides, who's going to clean and store them? And the theme of the party won't be the same next year!"


Slowly, as I started making friends, I urged them to hold eco-friendly get-togethers. I wrote to event organizers and temples to serve food in reusable plates quoting how all waste goes to landfills and oceans. Everybody would appreciate and agree with these concerns. They would nod knowingly and say "We completely understand and we also try to be eco-friendly but..."

The but always butted in! The 'but' had a few variations which were:
I couldn't blame them. "If you can't beat them, join them", goes a saying. I begged to differ. "If you can't change them, change yourself"! Why not carry my own reusable plate and spoon to parties? I could also carry my own water bottle. This way I would at least not be a part of this throwaway madness. That was my aha moment!

So when I went to the next birthday party, I carried a plate and spoon in the car with me. But at the last moment, I couldn't find the courage to actually whisk them out. I was new to the country, trying to fit in and I feared being branded a bumpkin - fresh off the boat- ignorant of western social mores. So I came back defeated from a couple of parties.

However, the issue kept bothering me. I could not stop socializing because of this. At the same time, I could also not be a mute spectator. Then, the power of the written word worked its magic. I came across a few quotes and they seemed to speak directly to me.

"If no one responds to your call, venture alone."

"I always wondered why somebody didn't do something about it. Then I realized, I am somebody."

The last one got me all shook up. Basically, it nailed it for me! When I knew it was wrong to use disposables and I could easily rectify that by carrying my own stuff, why wasn't I doing it just because "what would people say"?

This prompted me to create a modus operandi. If I got an invite, I requested the host to use reusable plates, spoons, and glasses. I offered to take a dozen plates of mine and also offered to help clean up post-party. Most of them politely declined, saying that though the thought was excellent, they wouldn't be able to do it at that time. Then I would tell the hostess that I would like to bring my own plate and cutlery and hope she didn't mind. Of course, she had no issues. So I found my opening and started carrying my own plate. It saved some awkwardness during the party when I pulled out my plate and spoon from my bag. Victory, at last!

Carrying my own plate became an interesting conversation starter. People would give me a totally incredulous look.

"You mean you carried your own plate here?"

"But, why? Are you a Brahmakumari?"
"Interesting! You know, they used to do the same in my town way back!"
"Nice to see you walk the talk."
"You're doing a great thing but what difference would a single plate make? See the heap of trash there?"

Whatever the reaction, I was glad that people were at least talking about the issue.

I had a couple of sectional steel plates that I had brought when I was setting up my household. These plates were convenient because they could hold 5 different dishes and made bowls superfluous. I decided to buy more of these and soon got 15 plates. Now, I started urging friends to use these at their parties. I would carry these plates to their home or venue. At the end of the party, a few friends would help stack them in the dishwasher or hand wash them.


Soon, our parties started turning green. There were setbacks with a few people refusing to use steel plates (remember the but?) but the positives far outnumbered the negatives. We still had to use disposable glasses and spoons at times. I decided to buy these too in time.

My idea was to have a steel utensils bank where I would lend these steel plates, cutlery and glasses for parties. Now that the test model worked, I was ready to try it out on a bigger scale. My joy knew no bounds when someone asked me if he could borrow these plates for a get-together at home. Pure happiness!

Now, I'm much more comfortable carrying my plate around. My friends and acquaintances are used to seeing me with it. I'm not a social outcast - yet!

This experiment has also inspired me to start a steel utensils bank, wherein people can borrow steel plates, spoons and glasses for free to reduce waste. More about it in my next post.

So, my learning from this experiment has been that if you have an idea for any positive change, just go for it. The world will adjust around you!
Posted by Anubhooti at 23:26