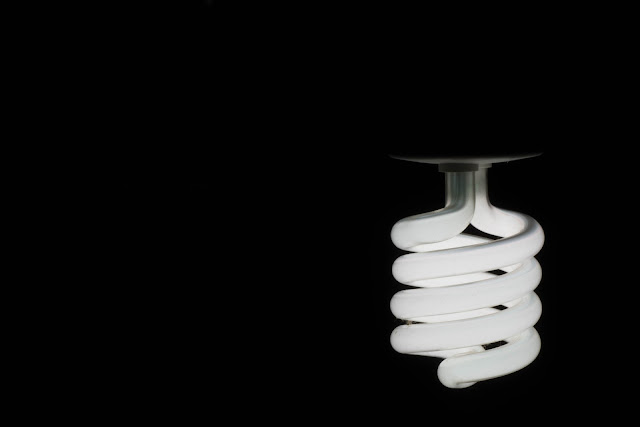 Fluorescent lamps have been darlings of green-minded people for quite some time now. Greening tips inevitably nudge you to "switch to CFLs". Governments encourage CFLs since they're more energy-efficient than traditional incandescent bulbs. CFLs use about 75 percent less electricity and last up to 10 times longer. With such impressive stats, what's not to love! But there is a dark fact about CFLs that many people don't know, for which I wasn't prepared and when I got to know, my green sensibilities took a harsh beating.

How does a fluorescent bulb or CFL work?


CFLs contain mercury vapour which produces ultraviolet light when stimulated by electric current. This light is radiated as visible light when it strikes the fluorescent compound phosphor painted on the inside of the bulb.

CFLs were my rockstars till I discovered some ugly truths about mercury, which happens to be a neurotoxin. Frankly speaking, I felt utterly betrayed. I always took an avid interest in environmental issues and read quite a bit. Most of the articles I read were busy comparing CFLs with incandescents and singing paeans on their energy efficiency. None of them highlighted the truth about mercury. There are a couple of major issues with CFLs:
How does mercury affect us?

Mercury is toxic in all its forms - organic, inorganic and elemental. Inhalation of mercury vapour can produce harmful effects on respiratory, nervous, digestive and immune systems. Methyl mercury is the most toxic form of mercury. Consumption of fish and seafood is the major source of this particular contamination in human beings.


The pros of  CFLs are heavily advertised but the cons are rarely publicised. The government is aggressively promoting CFLs in rural India with Bachat Lamp Yojana. Announced in Feb 2009, it aims at large scale replacement of incandescent bulbs with CFLs.

However, no proper collection and disposal facilities have been launched alongside. Leave alone consumer awareness campaign for safe handling /disposal of CFLs, there are no instructions on packaging about how to deal with a broken CFL. Hence it's no surprise that even highly educated people are not aware of the mercury presence in CFLs, the potential hazards of a broken CFL or how it could pollute air and water if disposed of irresponsibly.

To give an example, an engineer friend had casually left a broken CFL on her bureau and it lay there for a couple of days waiting to be disposed of. (Mercury vapours keep emanating from a broken CFL). She has two kids who were merrily playing around the CFL. If this is the case with the urban elite, the awareness level in rural folks can only be imagined.

The government is creating a Frankenstein and when ill-effects reach alarming proportions, it would scurry to douse the fire but by then it would be too late. The government should stop taking a myopic view of the situation and arrange for safe recycling and disposal infrastructure.

What to do when a CFL or fluorescent light breaks?

It is important to know how to clean-up in case a CFL breaks at home or work. We need to understand that we are dealing with hazardous material.

1. Evacuate everyone from the room. Babies and pregnant women should be the first to go as mercury vapours are most harmful to them. Make sure nobody steps over spillage while moving out.
2. Open external doors and windows to air the room while shutting off any doors to the rest of the house.
3. Shut any central air conditioning or heating. Let the room air out for at least 15 minutes.
4. Wear rubber gloves and change into old clothes. You might have to discard these clothes after cleaning. Collect cleaning supplies like cardboard or paper sheets, duct tape, wet wipes, 2-3 Ziplocs (or similar bags) or a glass jar.
5. DO NOT vacuum or sweep the place with a broom. Vacuuming could spread mercury-containing powder or mercury vapor to a larger area. DO NOT let kids help you
6. Collect broken pieces with the help of cardboards or paper sheets. Finer pieces can be collected with duct tape.
7. Clean the place with wet wipes or damp paper towels. Put everything including wet wipes and gloves in sealable bags or glass jars before putting it in the trash.
8. Wash hands thoroughly with soap and water.
9. Do not wash clothes which have come in direct contact with mercury in the washing machine."Direct contact" means if the broken glass and mercury-containing powder came in contact with your clothing or furnishing, it should not be washed in the washing machine. It should be discarded.
10. If possible, air the room for 24 hours. If not, at least for 7-8 hours.

As prevention is better than cure, be very careful when replacing CFLs and don't break them. One time exposure to mercury vapors might not do any harm but I for one, am not taking any chances.

While researching on CFLs, I vowed to switch to LEDs. LEDs, though expensive, are even more energy-efficient and last longer. But when I probed deeper, LEDs have their own disposal issues as they contain lead. Phew! More on LEDs in another blog post.

What can we the consumers do?

1. Raise your voice. Write to government authorities and pollution control boards asking them to:
a) Cap mercury content
b) Set up recycling units
c)Make it mandatory to display mercury content on fluorescent lamp packages.

3. Buy CFLs with low mercury content. Havell's apparently has a green CFL. I haven't seen the product or packaging, but if you are going shopping, do check it out. Keep abreast of any such developments by asking the shopkeeper.

4. Reduce the need for energy by responsible consumption.

Email ThisBlogThis!Share to TwitterShare to FacebookShare to Pinterest
Labels: Are CFLs green?, How to clean up a broken CFL, Issues with CFLs, Mercury in CFLs